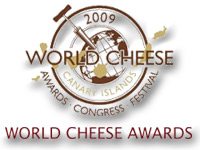 The World Cheese Awards are the most important international event in the Cheese sector. It offers producers the opportunity to compete on a global stage, in which prestige can be awarded in the Gold, Silver or Bronze categories.

In October 2009, the largest International Cheese Tasting in the world took place in the Canary Islands (Spain). The celebration of this event had the collaboration of the Ministry of Agriculture of the Government of the Canary Islands, the Cabildo de Gran Canaria and PROEXCA.

Nearly 3000 cheeses from around the world participated in this edition, which after being received at specific points in their countries of origin, were sent by air by the organization to the Alfredo Kraus Auditorium, in Las Palmas de Gran Canaria.

More than 130 international experts participated in the tasting on October 1, to award the prizes in the gold, silver and bronze categories.

In this event, two of the cheeses made by Hijos de Salvador Rodríguez SA were awarded.