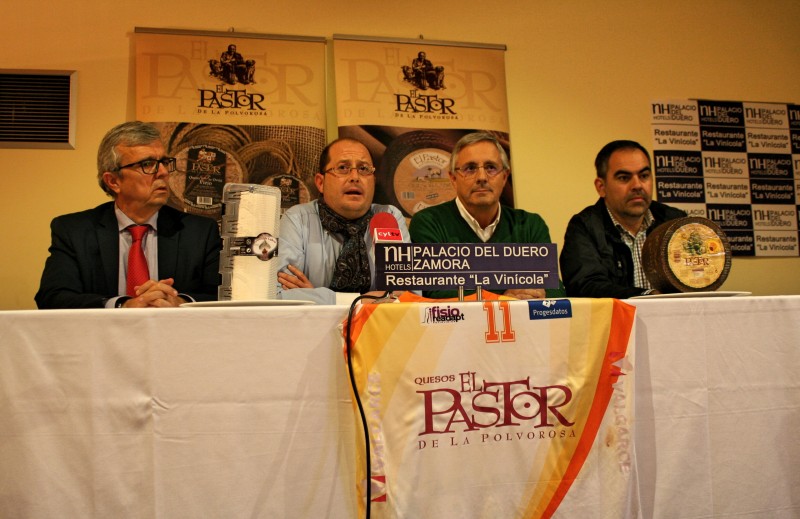 Quesos El Pastor de la Polvorosa and Club Deportivo Zamarat have today signed the agreement that will unite them during the current season at an event held at the NH Palacio del Duero before the media.

The first team has attended the event and has already worn its new image. The players have been delighted to have the support of Quesos El Pastor de la Polvorosa and eager to taste the variety of its products.

Eduardo Peña, NH director, played host to Marco Rodríguez, director of the cheese company and Carlos Baz and Roberto Hidalgo on behalf of the club.

The president of Zamarat took the floor at the beginning of the act to explain the agreement with Hijos de Salvador Rodríguez SA, explaining that “we were looking for an initiative of this type, we wanted a company in Zamora that felt what our province is, that was a great company with which to grow together. For us it is a pride to call ourselves Quesos El Pastor of the Polvorosa. This synergy that will be generated will be very positive for everyone, for women's basketball and basketball in the province ”.

Baz pointed out this support as fundamental to "continue growing, both at the base and in the first team", in addition to being excited about this moment, which comes after many months of work by the board. "Thank Marco for trusting us and we will fight a lot to defend your brand and your project."

Marco Rodríguez, for his part, wanted to explain the decision made by the factory located in Santa Cristina de la Polvorosa: "We are going to bet on this club that I think is worthwhile, we are from Zamora and the sport of Zamora must be supported". The head of Quesos El Pastor de la Polvorosa did not want to focus on talking about the company, "but about basketball, the real protagonists are the players." What there was is a request to put "desire, strength and enthusiasm and I'm sure that with this we will go far," said Marco.

After this, the club and company posed together before the Zamora press and could not hide their satisfaction at this new stage of collaboration that is beginning today.